Dan Xu, is trained in Traditional Chinese painting; her work features delicate ink and wash applied with wool brush on Xuan paper, After immigrating to Canada from China, with En Plein air painting practice, she uncover the ancient Chinese landscape aerial perspectives from 600 hundred years ago, and applied this floating perspective to the Maritime Landscape,
Xu’s approach is simultaneously ethereal and grounded, viewers will readily iconic landmarks and known features of the Fundy landscape.
Xu has participated in solo and group exhibitions across Canada and China, and her work is held in the public collections of the New Brunswick Art Bank. Xu is a recipient of numerous grants and awards, including funding from ArtsNB and Canada Council for the Arts.

​I have been researching ancient Chinese painting methods since 1992. Ever since 2009, I have been painting the landscapes of the Atlantic Provinces, and through these ten years since then, I have finished three projects where I documented the landscape using classical Chinese Ink-Wash painting methods. And, during these ten years, I believe I have uncovered the ancient method that the ancient artists between the Song Dynasty and the Ming Dynasty used.
I believe that the Ancient Chinese used aerial perspective and that the methods of Chinese landscape are rooted in the Chinese literature, “Zhuangzi Getaway” (bc.369) where the aerial views of a giant flying bird named Phang is described (bc. 369-). The landscape painter Jinghao (c.855-915) explored Chinese landscape painting theories under the Aerial perspective in his book, “Notes on Brushwork". In his book, Jinghao established a painting model that people painting landscapes should use. It was because of this book that after 600 years, the painting model remained intact, but few knew about the formula behind the pattern.
That is the reason most Chinese painters don’t know about this Chinese painting theory: it was lost, and even at the top of Chinese professional art school, young art students use western methods to create a traditional Chinese painting.
To test if I had truly uncovered it, I painted in Canada for ten years, not painting from photos, nor using Western painting methods. Instead, I captured the Canadian landscape in another realistic way. I painted using aerial perspective, the painting style and methods from ancient China, but the landscape from Canada. I want to bring an old but brand new way of painting to Canada!

Walking alone the Maritime’s coast, using my Chinese brush, I have been painting the Bay of Fundy for over three years, recording my observations with paintings, and understanding the land more. The Bay of Fundy is a powerful force in the Maritimes; with its tides and waves, it carved its own path through rocks. Hopewell Rocks shows the power of nature--she sculpts, but she also destroys. In the Summer I painted the coast of the Fundy, and in Winter I painted the snow.

When I first came to New Brunswick, I saw the snowy woods and mountains, so white and charming. I wondered, “Why not capture the unique beauty using my brush?”. So, again and again, I tried to capture the beauty of nature, using not only the ancient Chinese perspective and painting methods but also the Western painting style. Passion and serenity—they mix and coexist slowly in my ink, some in conflict, and some in harmony, just like my new life in this new land.

After having passed this eventful Winter, there’s a lot I want to express. I hope that through these works, I have captured the beauty of the Maritimes, this season, and this culture. It is all about the conversations between nature and I, rough or fluid, happy or sad, all from my soul.

Nearing the end of winter, we are awaiting spring.
​ 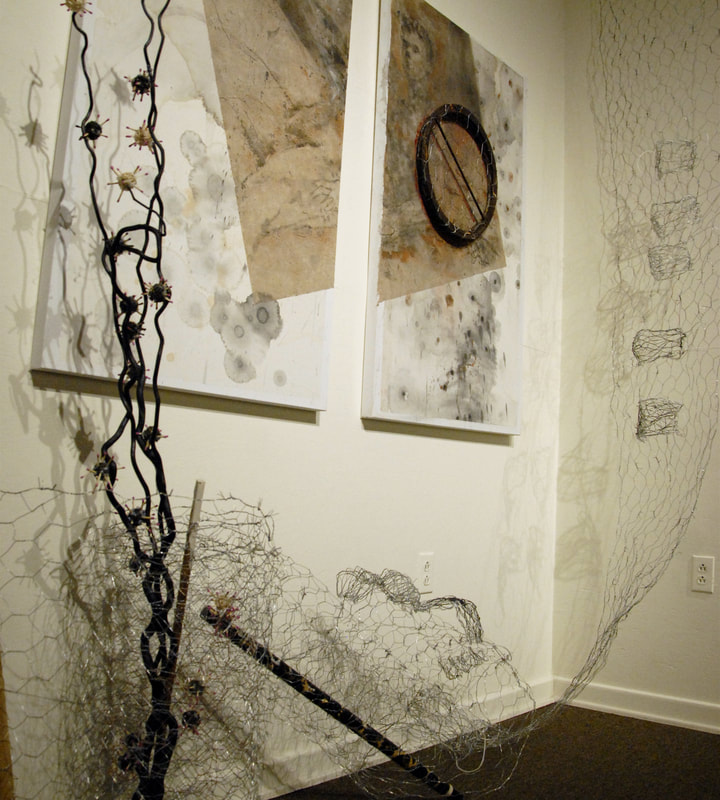 The Bay of Fundy

Classic Chinese painting is very descriptive – with a minimum of color it attempts to capture the spirit of the subject being painted. It is my intention to investigate, from the perspective of a new immigrant and using traditional Chinese painting methods, what time and social changes have wrought upon these compelling sites and structures. it is to not only gain further knowledge and a deeper understanding of what you see

the Historic Sites of  New Brunswick

"To read my painting works and understand their stories, you do not need to  know the Chinese painting language, and do not need to know Chinese characters. What you need is calmness and to walk with me into the landscape what you are familiar with, and then you will be awakened from the soul traveling deep within your memories about maritime natural beauty." -Dan Xu
It is my intention to investigate, from the perspective of a new immigrant
行走于大西洋沿岸，以我笔纪录所见的芬迪海湾, 潮汐神工鬼斧地塑造了好望石， 它展示着大自然的威力的同时也让我更为它着迷；于是这三年我在夏天写生芬迪，冬天则记录窗的雪景。当我登录纽宾省，见到雪林莽原，洁白而妩媚，寻思“为何不尝试用笔墨刻画如此美景？” 如此一次次地我尝试。以中国古典为主也揉进了西方绘画方式；热情与冷峻，混揉于我的墨中，时而冲突时而和睦，它，就如同我在这块新土地上的新人生。
在这多事之冬，我有太多的需要表达，有关大西洋，有关季节，有关文化冲突，无论它是纠结还是流畅，来自我与自然的对话；愉悦或忧伤，皆来自我的内心。在这冬季的尽头，约在春天相见！